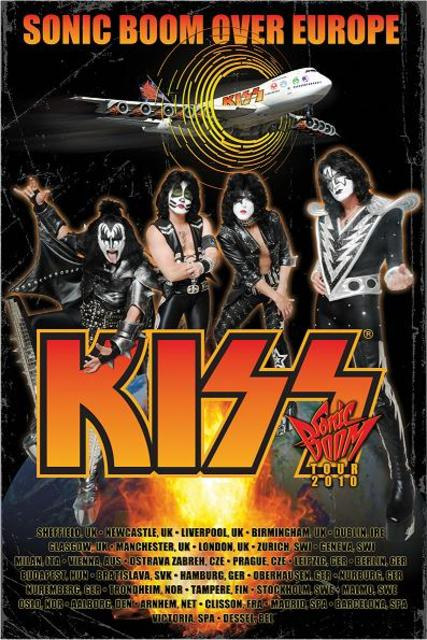 zoidberg
Ready to sing Shock Me!

I'll be there. My first time seeing them and I cannot wait. Come on!

ill be there too...that is, if my ears stop ringing from tonight's show

drummer
Ready to sing Shock Me!

I'll be there,this will be the fourth time on this tour!
Top

Good luck to all those attending tonight - I hope you have a good one.

I know wheresdrago will be there - he's just tweeted that he's en route.

Awesome, great show possibly my fav of the bunch, packed crowd, new vision of them entering stage tonight, same setlist. The crowd was tremendous and the place was packed. Managed to get photo with Shannonn Tweed who was great with the fans after the show.

That's my run finished now, they've all been great, what I take home tonight is the sea of smiling faces as the confetti fell, I LOVE THIS BAND!
Top

StarChildBlade
Nearly as many posts as KISS compilations!

Good for you, guys!
Top

Some thoughts and observations from last night...

I went to Sheffield, Liverpool, Manchester and the 2nd Wembley night and as much as I've had a downer on Wembley for years for various reasons THIS was the best night of the tour. Amazing atmosphere, and the band on top form.

Nice to see some interaction between Paul and Gene tonight. A few times they chatted between songs, and during RARAN, it was Paul and Gene stage-front and Paul kind of rested his elbow on Gene's shoulder while looking out to the crowd. Very small item, but cool all the same.

Gene appeared well up for tonight's show, but then it was a sell-out and he's bound to feed off a bigger crowd than a smaller crowd. I have no complaints though. I know some on the boards have seen clips from YouTube and have labelled his performance as either laboured or static, but I'm not quite sure what people want from him to be honest.

Little things spotted throughout the show;

There was a re-worked video entrance piece for the show. KISS still climb over the buildings etc, but once in the hall there is a different segment of them walking to the stage. Not sure if this was shown at the 1st Wembley night or not? Previously, Paul was left behind and he did a kind of camp "Hey, wait for me fellahs!" as he tries to catch up with them. That's altered now, and it's just a straight walk down the corridor to the stage.

Lots and lots of dry-ice during Gene's blood solo, so much so that down on the floor where I was you could barely see what was going on.

Gene's Punisher and Gene's Axe both had 'London May 13, 2010' written on them. No doubt for charity.

Everybody sang Happy Birthday to Eric (like the 1st night) after Calling Dr. Love (or was it before?).

I gave up my pleas for 'When Lightning Strikes' by the time Black Diamond started, lol, so I changed it to "We love you Paul!" which got a response of a thumbs up and 'something' was said into the mic (I don't know what was said, I was picking myself off the floor at that point! I hope it wasn't "Drago is a cock."). But then I realised "These bastards HAVE heard me shouting for that song for half of the tour!" They've just been ignorning me, lol. Fair play.

We all know about Paul's vocal issues the last couple of years, and it's been exposed again on this tour. When you're there, it's hard to tell what he sounds like sometimes, but when you listen out for it, you hear it. He tends to get better as the show goes on, which I don't personally understand, but yeah, his voice has stopped me from getting too many of the Instant Lives from the Alive 35 Tour, and I didn't bother with any from this tour... However, as much as I listened out for it last night, I can honestly say Paul sounded EXCELLENT for 95% of the show. This is defintely a show I'll be purchasing, given the chance.

Paul mentioned that KISS would like to come back before the year was out. Well, there defintely seems to be a market here for them at the moment. So many young fans at the shows, in make-up, and generally just getting into the swing of things. Wembley was rammed last night, and it was a great atmosphere. There were more young 'uns than old 'uns there and that can only be good, surely?

I didn't detect one glitch the entire show - other than lyrics being flubbed on 'I'm An Aminal', but that's been a feature of the tour anyway.

Side note : I went with 3 mates last night, and we're all complaining of a really bad sore throat afterwards (still got it today), I wonder if that was all the dry-ice during the blood solo or something? Or the air-con not taking the pyro smoke away? I know there was an issue at the club gig with the Co2 cannisters, but Wembley is a big shed. Anyway, we all got sore throats today - anybody else standing down the front got the same thing?

Anyway, that's it for now. We'll have to wait and see if KISS do indeed come back (how many times have they promised that down the years?), but I expect the halls will be busy again as people can't fail to realise that KISS give great bang for their buck, and the 2+hours of sheer entertainment is worth every damn penny - in whatever financial climate.

Best damn band in the World.

Where's Drago? wrote:Side note : I went with 3 mates last night, and we're all complaining of a really bad sore throat afterwards (still got it today), I wonder if that was all the dry-ice during the blood solo or something? Or the air-con not taking the pyro smoke away? I know there was an issue at the club gig with the Co2 cannisters, but Wembley is a big shed. Anyway, we all got sore throats today - anybody else standing down the front got the same thing?

'Sfunny, I had a sore throat all day Monday, I just put it down to singing and cheering for two hours on Sunday night though!

Too damn right! You can say that again.

deuce75
Welcome To The Show!

phoenixphil
Ready to sing Shock Me!

13th of May was fantastic! I went along with my wife (who is largely indifferent to their music) and we were standing sort of near Paul's second stage. The new Google Earth intro was excellent... really cheesy and OTT but very exciting.

Early on I was worried as the people standing near us were largely static during MDD and Cold Gin (I think i had been spoiled by being at the rapturous Islington gig) and didn't really wake up until the jam outro of LMGRnR.

Bizarrely it was Say Yeah that really got the crowd around us up and going - it was really treated like a new hit, then when they showed the first album's cover on screen I felt a ripple of excitement pass over the crowd which turned in fist pumping mania as Deuce kicked in.

Crazy Crazy Nights really got the whole of the audience on side though - putting this song back in the set list for the UK fans is one of the smartest moves the band has made in terms of cementing their reputation in the UK. It was slightly spoiled by some Shoreditch type stumbling all over the place with his camera phone filming himself singing along to it (I don't mean bouncing which is fine I mean drunkenly stumbling into people with his elbow out)... he left straight after the song had finished so I'm guessing it was the only song he knew.

The momentum from CCN continued through Calling Dr. Love and also Shock Me (which went down a storm around us with people singing along word for word). The guitar / drum solo reboot was AWESOME... Tommy and Eric have really found a way to re-invent that part of the show for modern audiences plus it also increases their profile as equal members.

I thought I'm An Animal was a great addition and held up surprisingly well against the classics plus I loved Paul's campy intro of "We're going to slow things down.. but it's still gonna be tough!" Pure Starchild! The new slim lined 100,000 Years sounds a lot fresher without the drum solo and the (possibly Islington influenced) "whoah-oh oh oh" audience participation bit over the solo has breathed new life into Detroit Rock City. I wasn't expecting to hear an arena of people sing a guitar solo and it still makes my spine tingle when I think back to it. Whole Lotta Love / Black Diamond was similarly inspired and hungry... I cant believe I wrote this band off back in 2000. I love Ace and Peter but I mean, this gig was a galaxy away compared to the tired old band who recorded things like the Millennium concert.

The encores were surreally good.. I can barely remember them. The crowd were truly rev'd up by this point... Lick It Up got one of the biggest reactions of the night which surprised me. Paul flying over my head and prancing around on a podium singing I Was Made For Lovin' You was truly a fantastic moment in my Kiss-fandom... it was so mind-meltingly fantastic that after that, GGrnRTY & RnRAN were just one big fuzzy grinning from ear to ear singalong.

A fantastic night and although my wife still isnt a fan of their music she said it was a lot better than she expected and admitted on the way that they made a lot of bands look extremely boring.
Top