Still here for the bored...

CanadianMetal
Welcome To The Show!

I will be at his show , and Judas Priest the night before. \m/
Top


if anyone wants to say hi...let me know...I'll check back here later....to see who's going

so is Priest playing in Vegas Friday??
Top

If you see a guy today in Vegas wearing a rock and roll over shirt and black hat..green and black Pumas..and dickies board shorts come up and say hi.

Staying at the Hard Rock.

gothunder
Nearly as many posts as KISS compilations!

CanadianMetal wrote:I will be at his show , and Judas Priest the night before. \m/

I for sure spotted people I recognized from the KISS world last night..funny how fans are recognizable...must be all the photos people post. When I get home I can add up the stuff I've snapped.

Last night this one bar at the hard rock was going off. Kiss Videos on the big screen, and a guy in an Eric Carr costume that was PHENOMINAL!!
Top 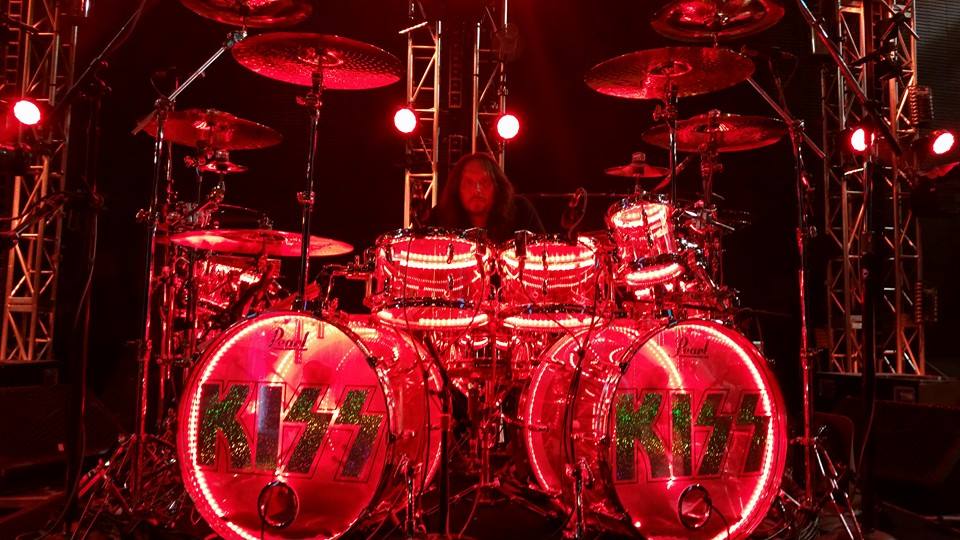 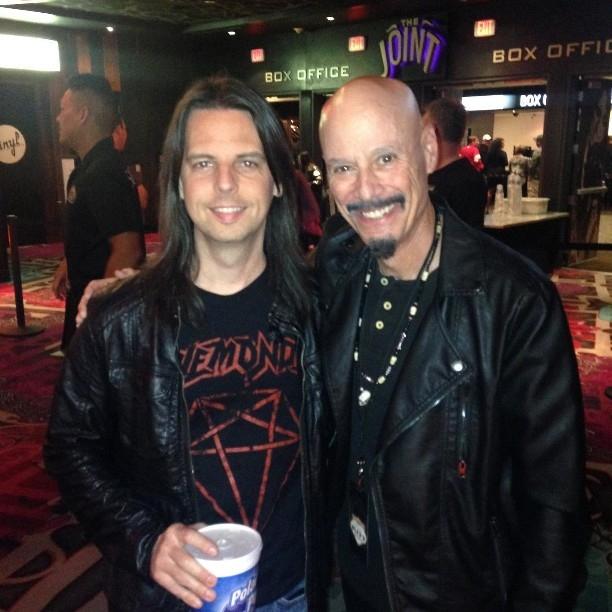 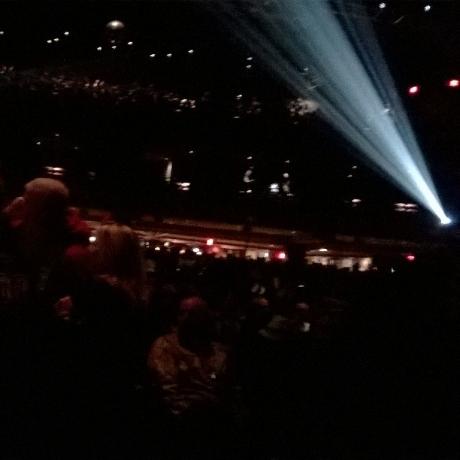 Got some great photos and about an hour of video. I have serious doubts on audio quality though unfortunately.

Cool shit though. The show was really good I thought.

At the back bar at the Hard Rock now..will post stuff when I get home.
Top

BlackDiamond67
Spends too much time FAQ'ing off!

Nothing really different tonight except my girlfriend thought the energy was better than last night. Paul pulled one little girl (around five or so) on stage to help him strum during a song. It was a cute moment and one she'll remember forever (or at least her parents will).

Aside from the show, there was a KISS cover band over at KISS Monster Mini-Golf during the day along with Ken Kelly. I talked with Ken for a bit after having him sign a small print that I purchased. I told him that Space Invader was a cool cover. He talked about the political wrangling that went on to get the cover approved...to make it KISS-ish while not getting into legal issues. I asked him if he'd heard the album and said that Ace had sent him an autographed copy, but that he hadn't listened to it yet. I gave it my stamp of approval and he said he'd give it a listen. Very nice guy and was gracious to personalize and take a photograph with any purchase whether it was for a $10 print or a $400 original pencil sketch.

Oh, the book signing - I thought they managed the crowd much better than last Saturday. The books were pre-signed, but if you had your receipt, you could get a quick photo with Paul. One of the many highlights of my stay here thus far. I met a few cool KISS fans - one was from Seattle who had seen KISS 57 times!

It was a good day to say the least.
Top 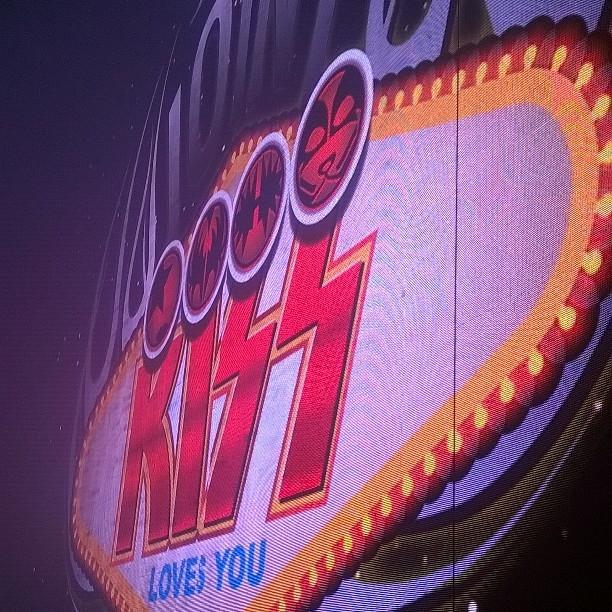 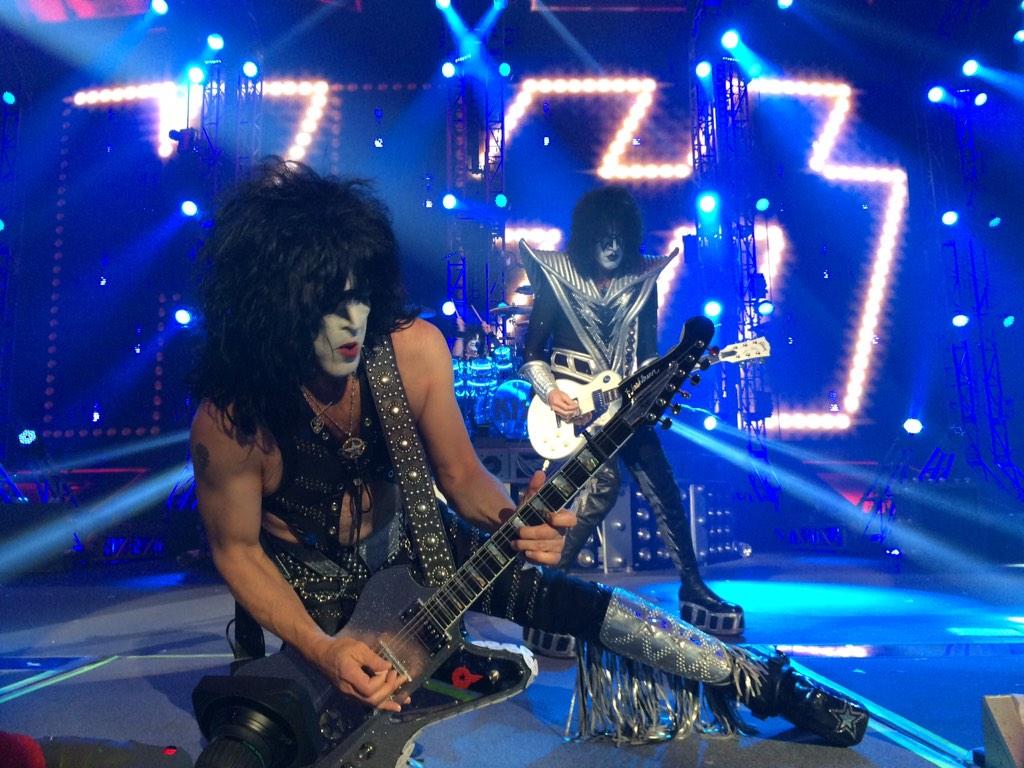 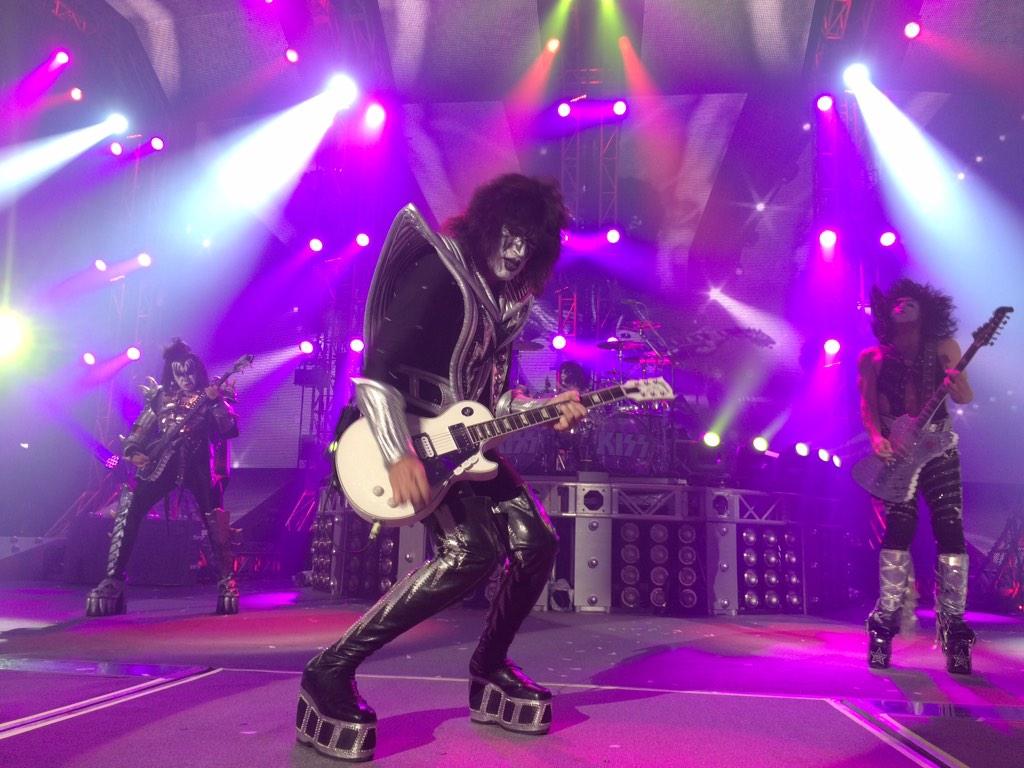 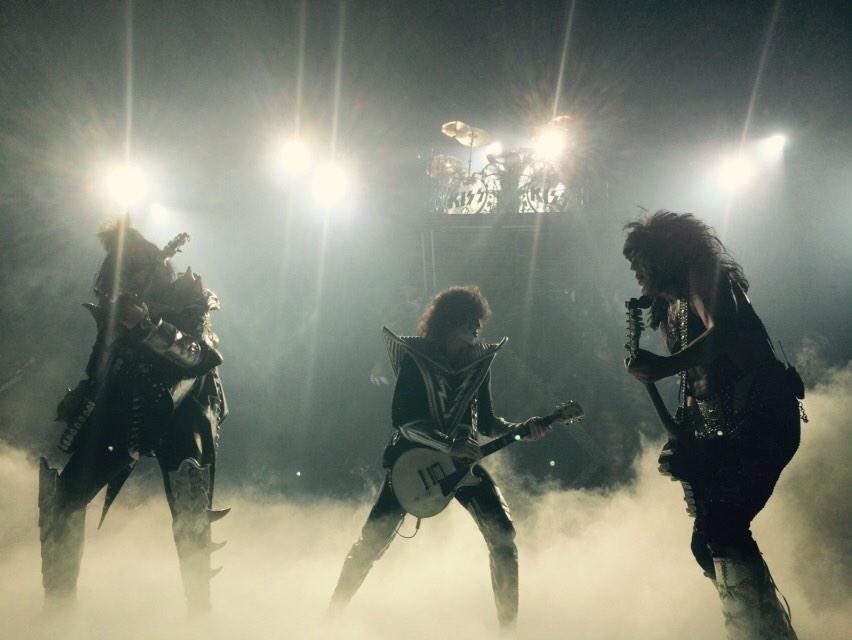 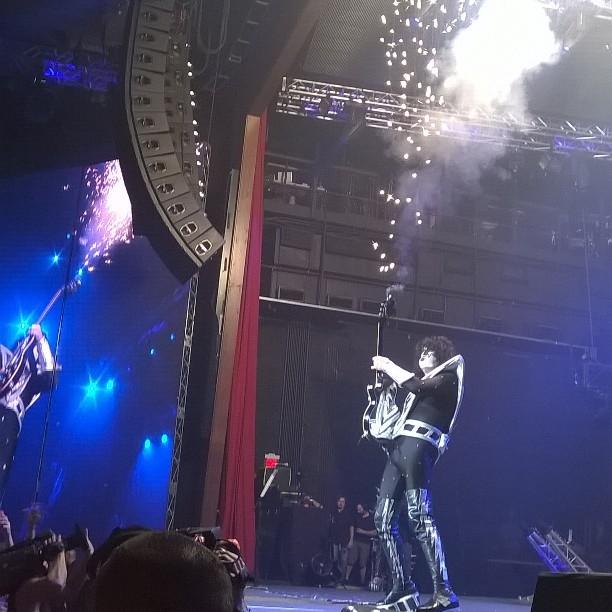 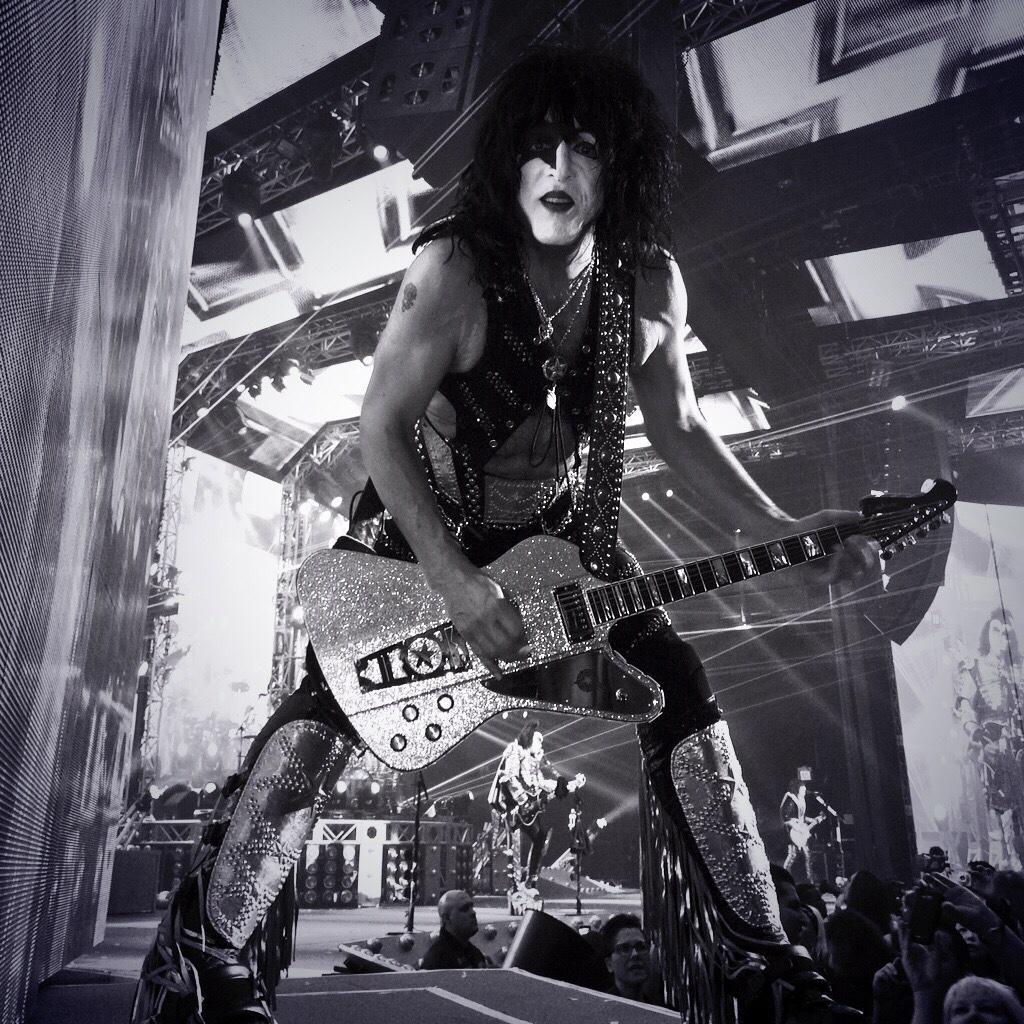 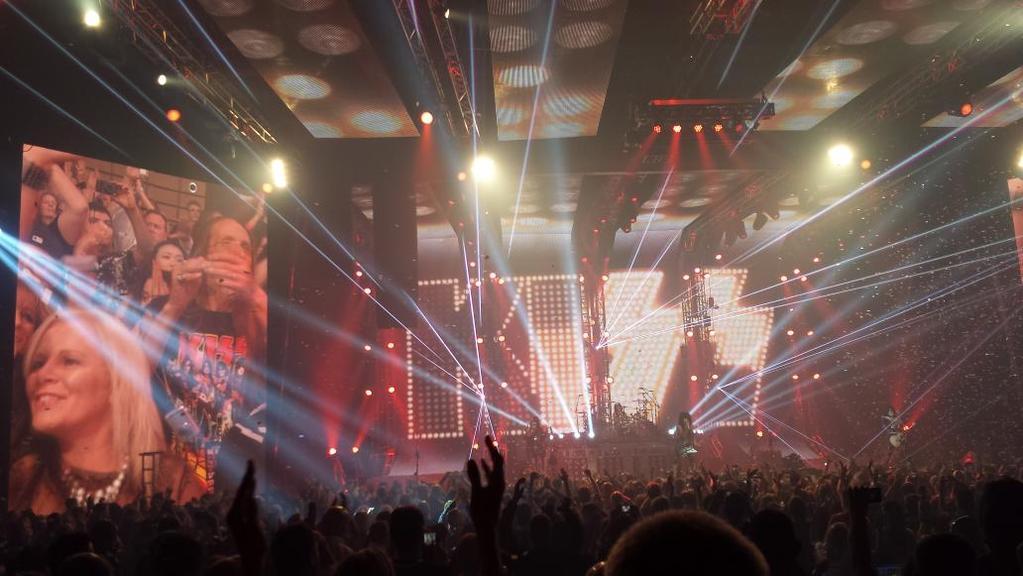 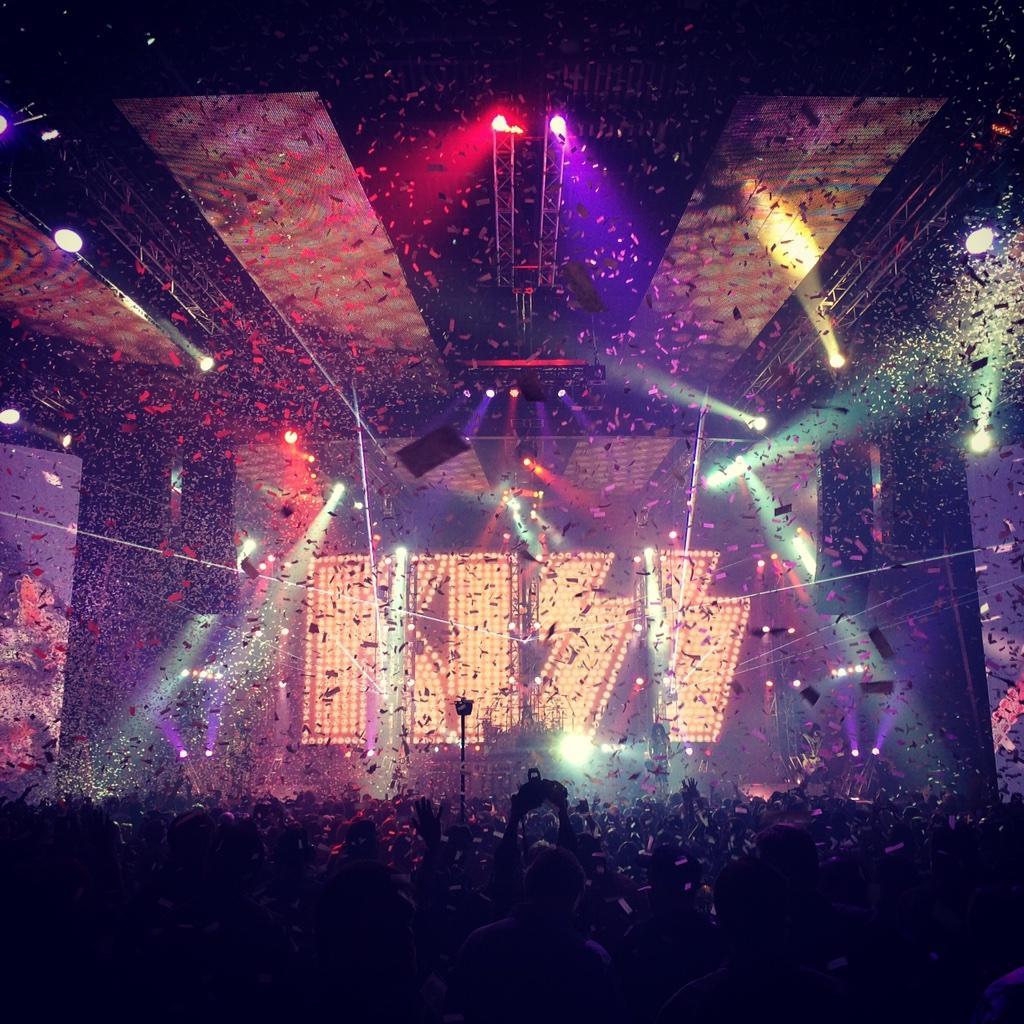 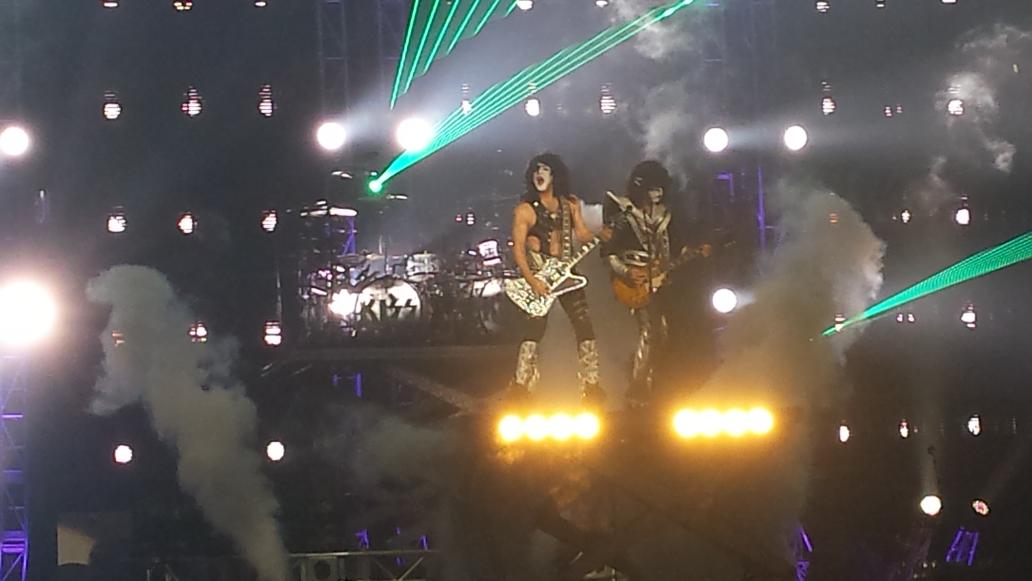 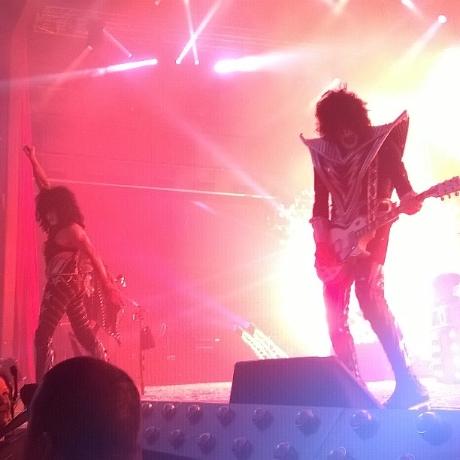 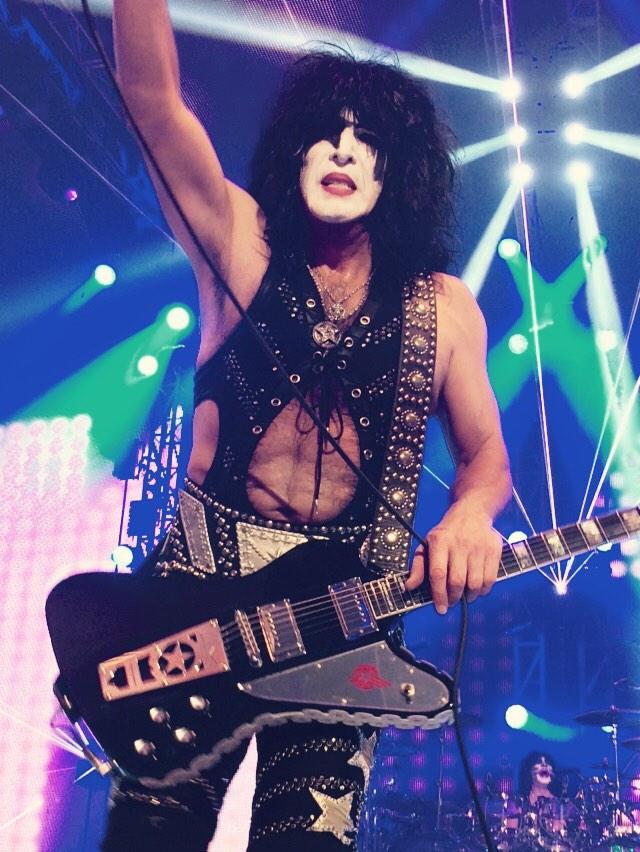 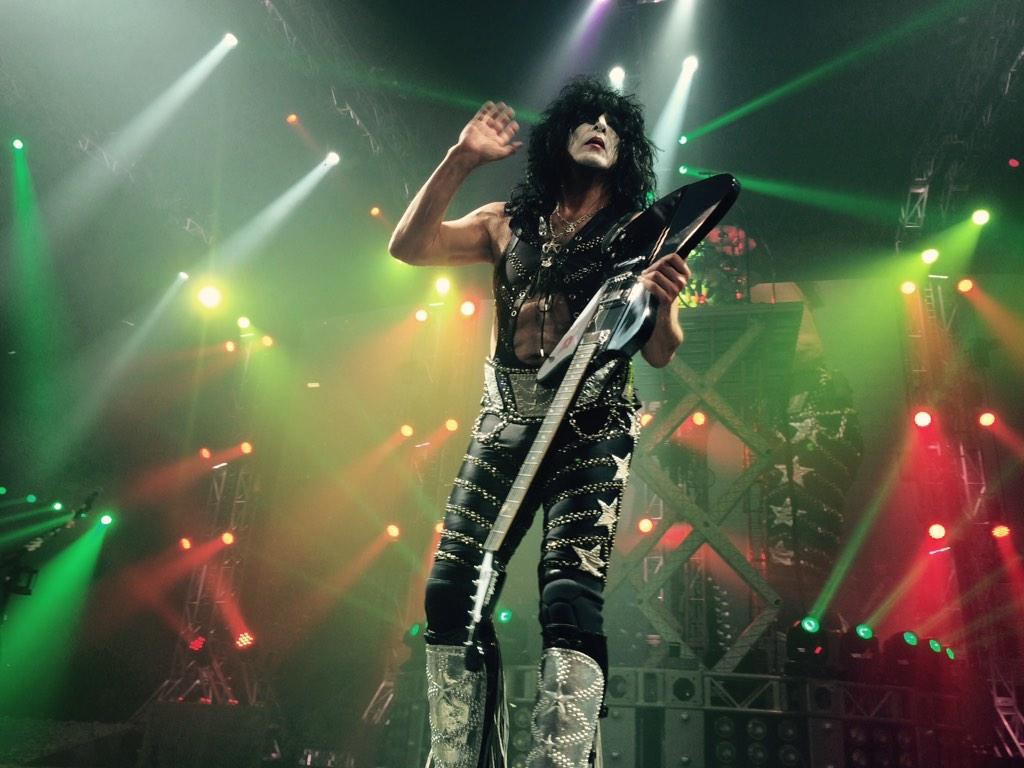 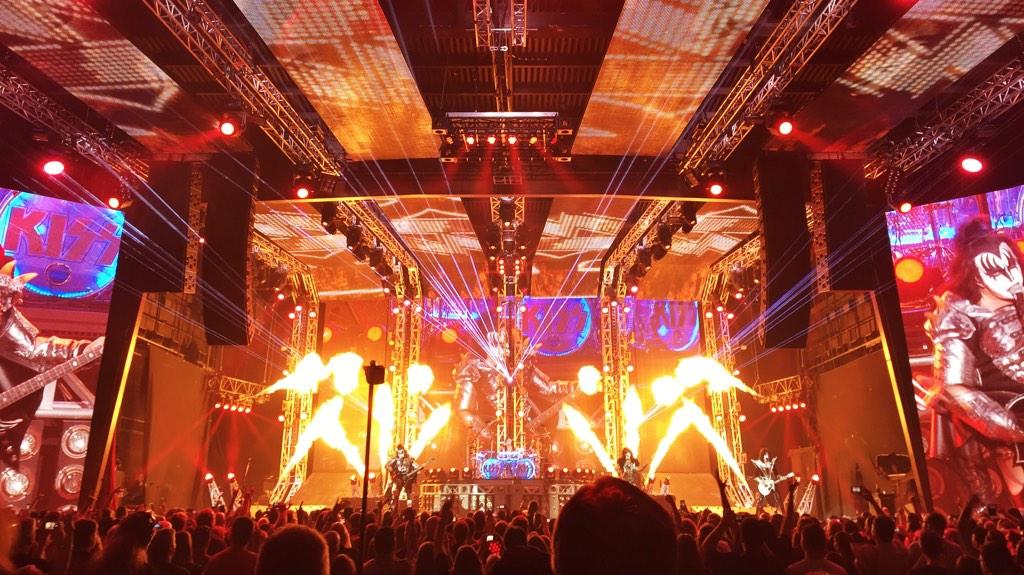 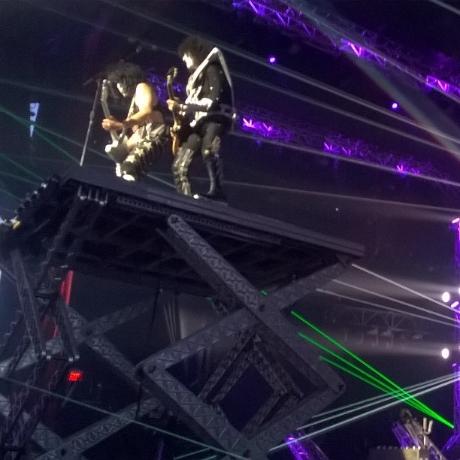 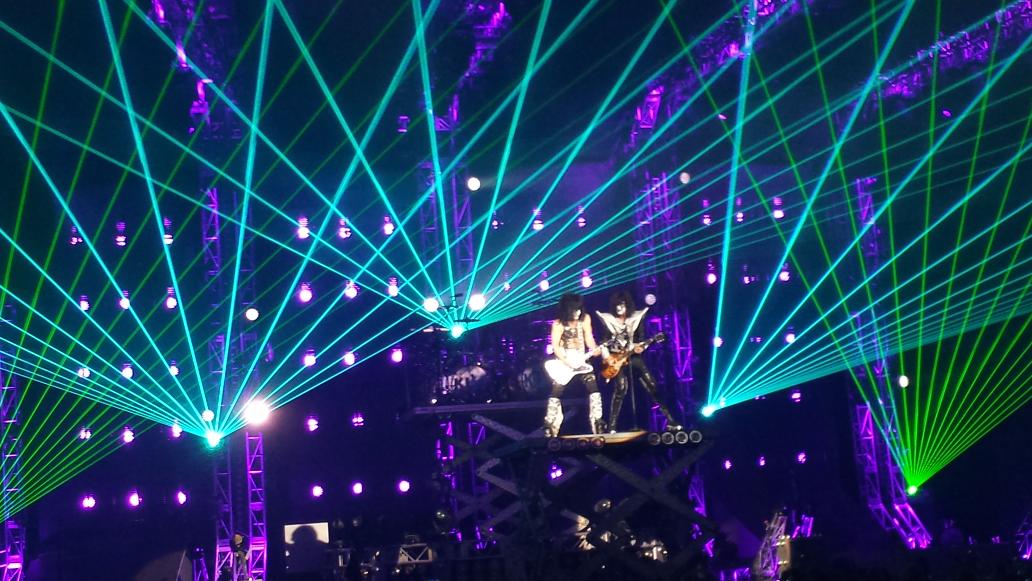 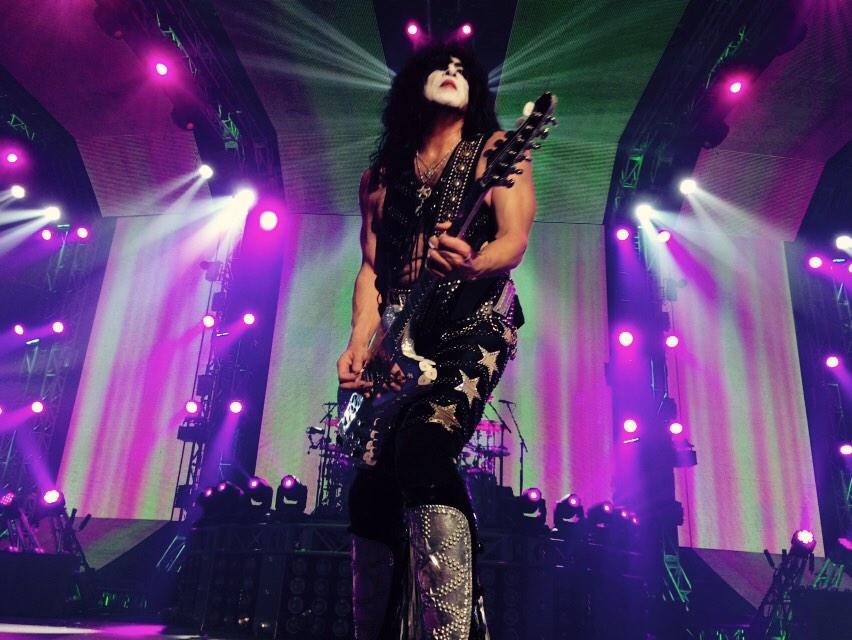 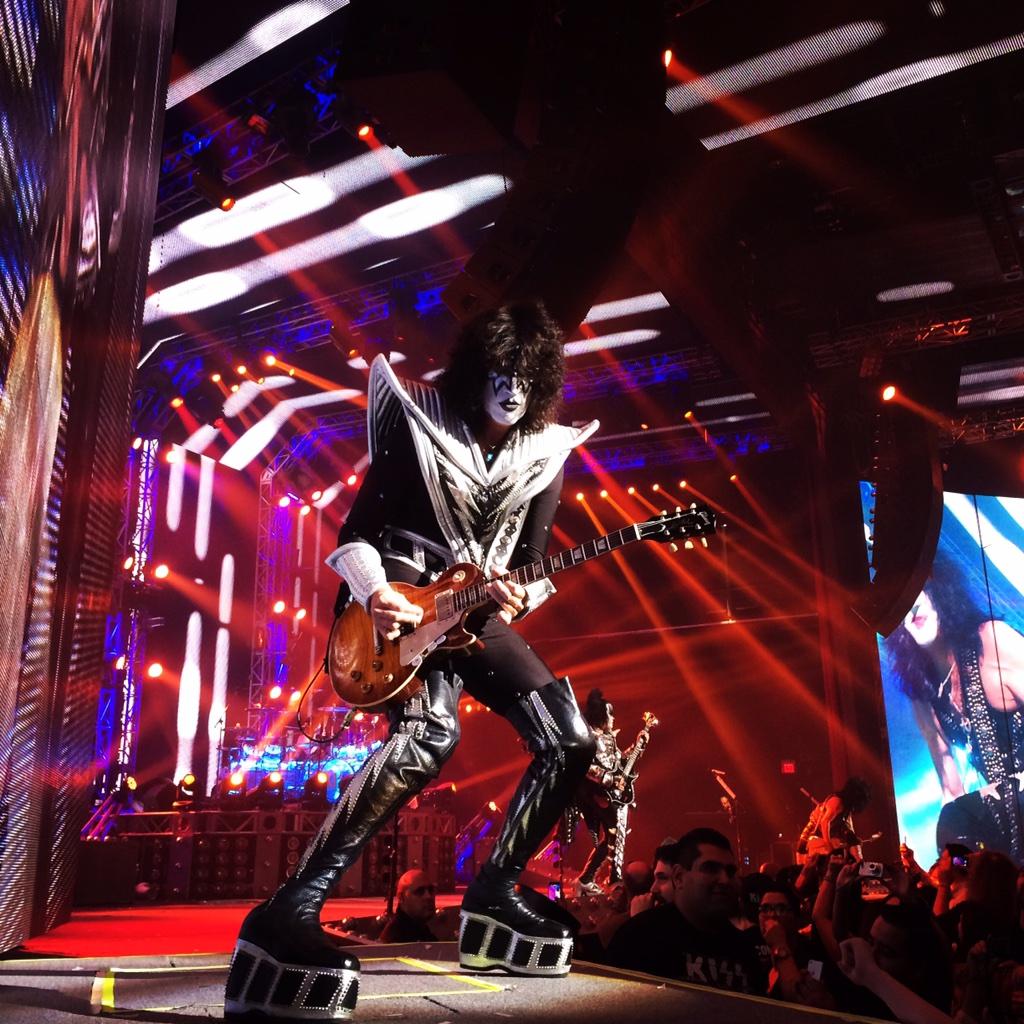 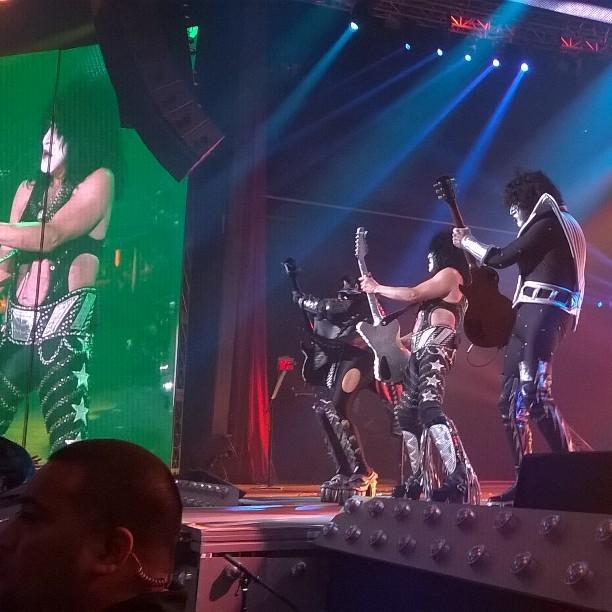 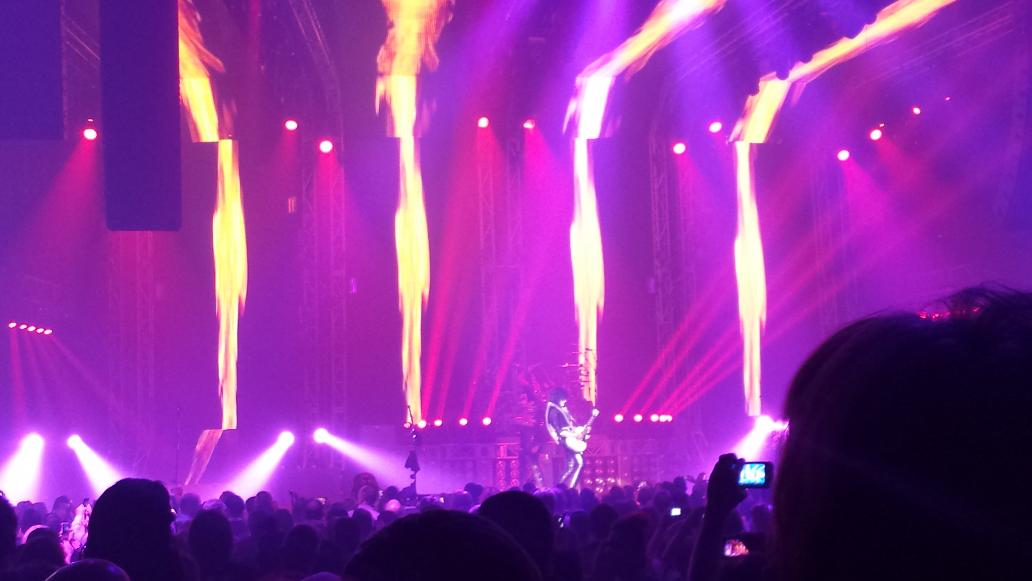 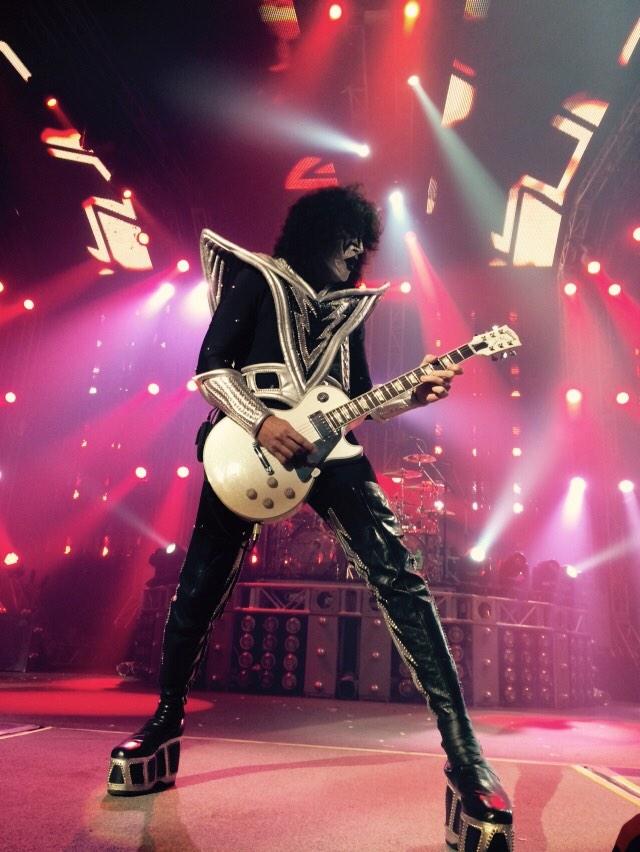 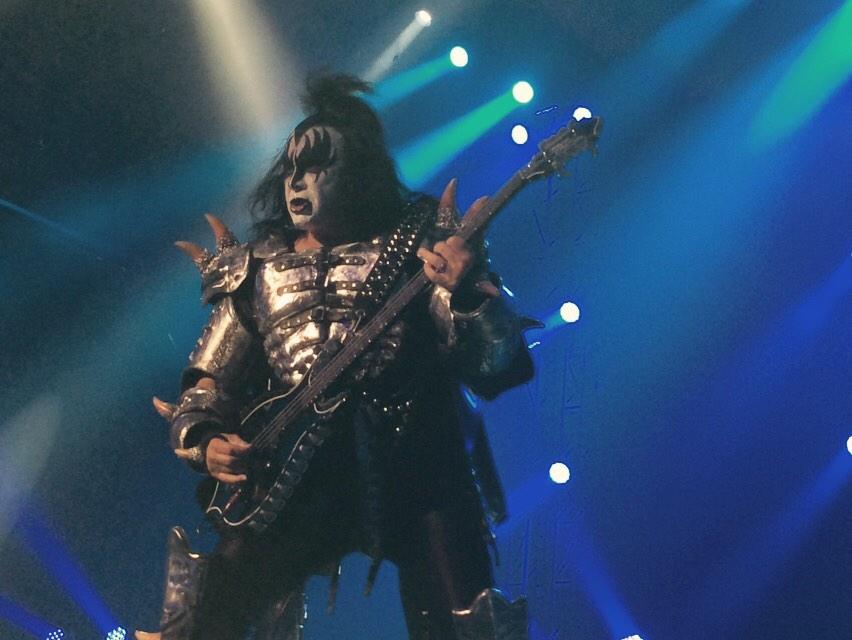 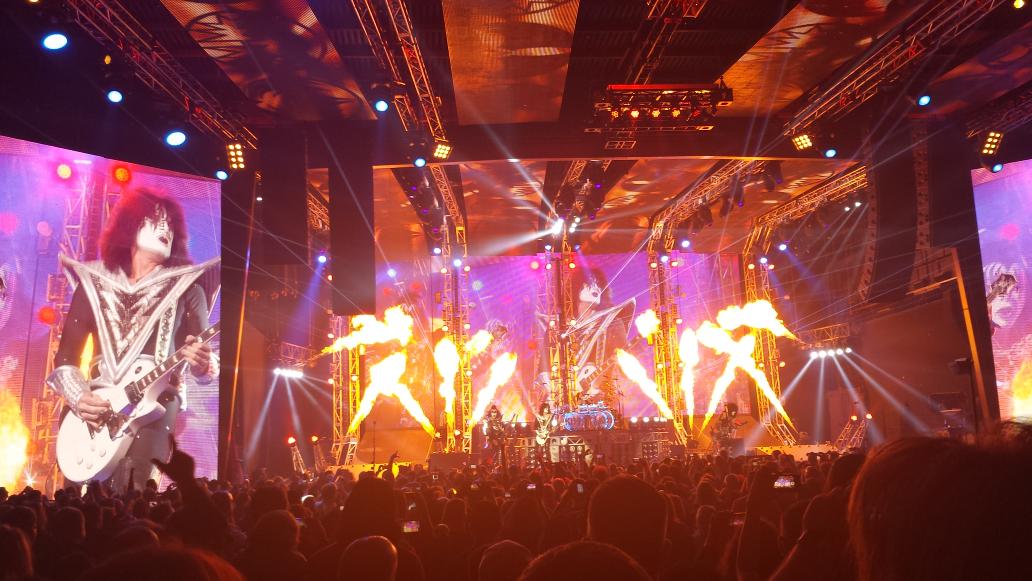 Crown Royal
Nearly as many posts as KISS compilations!

My daughter brought her BF to his first KISS show. He is a guy who can't get enough of the Beatles and Traci Chapman.

His text after the show: "AMAZING!"

what song they're using as intro tape before the start of the show? Still "Rock and Roll" by Led Zeppelin ?
Top

I think it was AC DC....just waking up and at airport...slightly groggy.

I'll get some stuff up when I get home...

newyorkgroove wrote:what song they're using as intro tape before the start of the show? Still "Rock and Roll" by Led Zeppelin ?

I have video of right before they came on. I started taping because I could see Gene's dragon boots under the curtain...they started playing within 60 seconds of that...


I may be off...but on my clip it's "Only Rock and Roll" by the Rolling Stones.

let me know I'd be curious if they went from the middle of the Stones to Zeppelin which I don't remember.

I'll start posting some images...these are just screen caps off my video...debating how to upload the video clips...as I thought the audio is pretty blown...

I did it more to remember the night than create a master video of the show....also because of my distance from the stage which wasn't that bad in person...but my phone/camera wasn't going to nail any amazing tight shots unless they were on the big screen/

that said...I did get some really nice video...so for eye candy...I have some decent stuff for sure. more screen caps...I had to basically do almost montage type shots...where I'd try and squeeze in a bit of the big screens to have something more worthwhile...

This was a really good high energy show...had decent seats...and a great time. Only wish I could have worked out two shows, but I just couldn't manage it.
Top
Post Reply
24 posts • Page 1 of 1